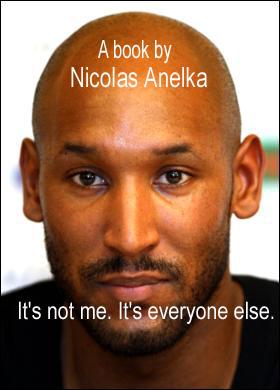 What a stressful an frankly ridiculous couple of days! It started a week last Friday night when, being very bored, I decided to start my own satirical football site called Crab Football. Harmless enough you’d think. First I wrote an article about how Arsenal’s aloof manager, Arsene Wenger, had predicted 9-11 two years before it happened. I then followed this with another quick fire entry on West Ham’s lost striker Dean Ashton, who had fallen off the face of the planet and was being searched for by his manager.

I was very happy with the results.

So then a day later I wrote a spoof article about Nicolas Anelka’s forthcoming autobiography ‘It’s not me. It’s everyone else.’ If you don’t know much about Anelka all you will need to know is that he’s pretty unpopular and generally seen as a trouble making money grabber. So the excerpt from his autobiography I wrote was meant to be a perpostuous piece on people who had wronged him.

I decided to write in this historically inaccurate article that essentially he left a former club because their captain, Patrick Vieira, had slapped him around the face with his penis. Yes that’s right. You heard. I have the mind of a deficient child.

I wrote it very quickly, sniggered to myself and went to sleep.

Anyway over the coming days my site literally exploded. And when I mean exploded I mean in comparison to this blog, which usually attracts 10 or so lost souls a day. However this was just the tip of the ice berg because despite copyright and disclaimers the autobiography got pilfered left write and centre and many, many websites started posting it up without links to my site. This was:-

a) Annoying that people were claiming my work.

b) Grating because I wasn’t getting the hits I deserved! (I love watching the site visit chart grow!)

c) Scary because even though these sites printed the work verbatim, none of them caveatted it. None of them categorically stated it was fake.

At first I was just happy it was being read but my face literally drained of colour when my site started getting visitors from youtube.

“Strange!” I thought “Why would my article be linked on youtube?”

It was only then that the true horror of the situation hit home, on youtube was footage of that afternoons Charity Shield game and some innocuous footage of Anelka waiting for a corner.

All I could make out from the commentator was:-

One phone call later and my Finnish friend translated the content. The bare facts is that the commentator, Antti Mäkinen, was passing on these lurid allegations to the audience at home, apparently oblivious that it was a spoof. I don’t know if the Finnish do sarcasm but I could detect none on the commentators voice.

Anyway it’s been two days now an there has been no fall out. I hope the footballing world (an Mr Anelka, Cole, Vieira and Dickov) have a sense of humour.

4 thoughts on “I apologise Mr Anelka!”